The project of Fumin Xinggong Reservoir is under construction. The once-in-a-century drought has caused the drought in Kunming to continue to increase, and the storage in Kutang continues to decrease. Dozens of reservoirs and hundreds of ponds have dried up... 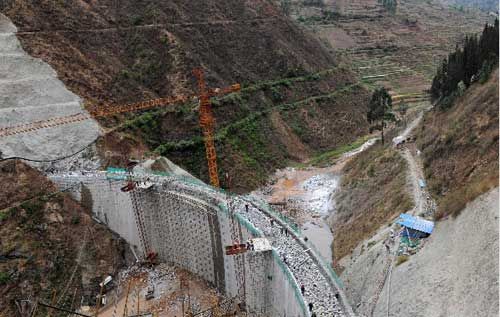 The project of Fumin Xinggong Reservoir is under construction.

The once-in-a-century drought has caused the drought in Kunming to increase, and the reservoir storage in Kutang continues to decrease. Dozens of reservoirs, hundreds of ponds and dams have dried up, and many rivers have been cut off, with more than 700,000 and more than 400,000 heads. Large livestock have difficulty drinking water. Serious droughts occurred in 14 counties (cities) and 3 development (holiday) areas of the city. As of now, the drought is still continuing. According to a comprehensive assessment by the meteorological department, the current drought level in Kunming is a severe drought in 100 years.

In fact, drought is not a strange word for Kunming. According to the statistics of the meteorological department, Kunming has a small drought in three years and a large drought in nine years. Every time the drought comes, the first to suffer is agriculture and farmers. What is the reason why Kunming, the city with an average annual rainfall of 1006 mm, regards drought resistance as the normal state of dry season agricultural work? Is it congenital climate? Or is the development of agricultural facilities lag behind? How should Kunming crack this "weird circle" that is full of water and thirst?

Eat by the sky

Talking about the words of conservation tillage and water-saving agriculture, she looked at her face and talked about how to irrigate. She made a gesture of waving and saying that it was not poured into the ground.

Shajing Village, located in Dabanqiao Sub-district Office of Guandu District, is a typical area with severe drought. It is said that it is typical because the situation here can basically summarize the situation of rural drought in our city. Shajing Village has an altitude of 2,248 meters and an average annual precipitation of 1000 mm. It mainly produces crops such as grain and vegetables. Because the precipitation is abundant, the farmers here have not been very worried about water use. But this year, the villagers here are also starting to worry about water.

When we arrived at the village of Bi Lijiao in Shajing Village, she was busy in the kitchen. The water in a small aluminum basin was muddy because she washed more than a dozen bowls. Bi Lijiao said that the water could not be poured and left to feed the chicken. When the reporter and Bi Lijiao talked about the words of conservation farming and water-saving agriculture, she looked blank and talked about how to irrigate. She made a gesture of waving and saying that it was not poured into the ground.

Shajing Village is not realistic because of the high altitude. The villager Lao Yang told the reporter that over the years, the problem of drinking water for the villagers has mainly relied on water pipes to bring water from the water source 11 kilometers away to various households. The agricultural irrigation mainly relies on the sky, and the farmland has basically not built any irrigation facilities. It is really so bad that the agricultural vehicles are used to pull water from the water source to pour the land. However, this year's severe drought has made it difficult for villagers to even eat water. Where can they take care of their crops?

In the streets of Shajing Village, a wire bed was filled with all kinds of bagged corn seeds, but the villagers just picked up the seeds and put them in their hands, and put them back. Because of the drought, the villagers in Shajing Village this year can be described as heavy losses, Xiaochun granules have no harvest, and the spring crops are still not planted in the ground.

The old people in Shajing Village said that there are 8 large pond dams in the village that can store water. However, because of the long-term disrepair, the ponds are leaking seriously and there is no water at all. Therefore, the villagers have long abandoned them. The reporter saw one of the ponds at the entrance of the village. The bottom of the pond was full of silt and straw, and dripping was not seen.

However, in some vegetable production bases in Chenggong and Jinning, vegetables have grown well and are not affected by drought. In the drought year, these vegetable greenhouses adopt measures such as drilling wells, applying sprays, drip irrigation and water-saving technologies to ensure water-saving irrigation. The water consumption in this way is 1/10 of the ordinary irrigation method. In the face of high temperature and drought, many vegetable bases have also replanted fast-growing leafy vegetables, shortening vegetable growth time and accelerating time to market, which also saves a lot of water resources to a certain extent. (Kunming Information Port)

The value of China import data