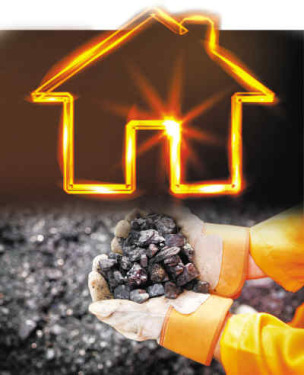 Rich in coal, the billionaires in Erdos and Yulin have over 10,000, and a large amount of idle funds have been invested in the Dongsheng-Shenfu coalfield, the world's top eight coalfields, and China's largest coalfield. In this piece of land, there are two shadows of the vitality of Chinese private capital: Ordos in Inner Mongolia and Yulin in Shaanxi.

Gao He Investmentâ€™s latest research report on Chinaâ€™s private capital investment stated that it is conservative to estimate that there are no less than 7,000 wealthy individuals with more than 100 million assets in Erdos, and the number of billionaires in Yulin is still not under Ordos. Due to the large amount of â€œblack goldâ€, the coal per capita GDP of Ordos surpasses Hong Kongâ€™s ranking first in the country in less than ten years, making Yulin the top spot in Shaanxi Provinceâ€™s economic growth rate for five consecutive years. The investment trends of the concept are similar, and high-return systems such as energy, coal mines, and private lending are eliminated, and a large amount of idle funds flows to the real estate market.

In front of the car, Shanxi's "ecological scar" is startling. Ordos and Yulin, who are twinning on the same "black gold", will be bleak in the same place after getting rich in coal?

There are at least 78,000 billionaires, no less than 100,000 people with assets of 10 million yuan, and 1 million assets can only be regarded as "the poor." In the Gaohe Investment Report, Ordos, with a total population of only 1.5 million people, experienced a fantastic wealth in less than 10 years.

According to a local person who works in the Bureau of Industry and Commerce in Ordos, in addition to billionaires, Ordos has assets worth tens of millions of people, at least 100,000 yuan. In other words, among every 217 people, there is a billionaire, and every 15 people have a multimillionaire.

In contrast, the "new" Yulin is no less. There are 4,000 wealthy billionaires in the subordinates of Shenmu and Fugu, and more than 6,000 of the billions of assets in Yulin. The total population of the two counties is 716,000, that is, there are 1 billionaires in every 179 local people.

The rise of the two cities is inseparable from the "black gold." Ordos has proven reserves of 149.6 billion tons of coal, accounting for about one-sixth of the country's proven reserves, but the popular saying goes that, according to the current rate of exploitation, coal in Ordos can be dug for another 700 years. Shenmu County has a total area of â€‹â€‹7635 square kilometers, its coal storage area reaches 4500 square kilometers, and its reserves have reached 50 billion tons. Fugu County has proved that coal reserves have reached 20 billion tons, and Jurassic coal with extremely high quality has accounted for 15 billion tons, and the combined conditions for coal resources near water are better than those of Ordos, and the development potential is imaginable.

The huge amount of â€œblack goldâ€ flows to real estate â€œUnlike China's general small county town, the most prosperous streets on Shenmu and Fugu County are not covered with small supermarkets or small hair salons, but are a series of investment companies. They are covered in the most important streets in Shenmu County. More than 50 banks and thousands of listed and unlisted investment companies.â€ Zhang Yingguang, managing director of Zhuang Ling Consulting, who has just completed investigations in Erdos and Northern Shaanxi following Gaohe Investment, reported to the â€œChina Energy Newsâ€ on June 2 Describes the wonders of the city of Godmu and Fugu.

According to reports, the scale of private finance in northern Shaanxi is staggering. Among them, Shenmu County Rural Commercial Bank has a deposit of over 20 billion yuan, and other major banks also have more than 20 billion yuan in deposits. The local private financial institutions have conservatively estimated that the deposited funds can be three-fold with the former and even exceed the size of the banks.

Where does such a large private capital go?

There has been an official internal assessment that the private capital of Erdos may account for 30-40% of real estate and 60-70% of the coal industry. Even if it is difficult for researchers to grasp the accuracy of this figure, "but it is certain that private capital is still more invested in the high-return coal mining industry." Zhang Yingguang told this reporter that "In northern Shaanxi, this The proportion of investment is about half to half, each accounting for 50%."

According to the report, in addition to returning large amounts of funds to the coal energy industry in northern Shaanxi, the remaining unused funds are mainly invested in the real estate market in other cities. Northern Shaanxi investors have the characteristics of large investments and relatively inexperience in investing in first-line real estate, which has formed a follow-up type of investment. The main regional markets for investment are Xi'an, Beijing and Hainan. Some investors even invest in Ordos.

"Investment is something to do in Xi'an, and in Beijing it is to save some money." Zhang Yingguang analyzed most of the mentality of Northern Shaanxi investors.

The Ordos people are more willing to invest their wealth in local real estate and energy, coal mines, private lending, etc. after gaining wealth. The small and medium-sized investment customers with assets ranging from RMB 50 million to RMB 100 million or less basically choose to invest locally or in Inner Mongolia. Their investment gradients generally represent the gradual upgrading of investment characteristics in the external markets such as Ordos, Hohhot and Beijing.

â€œAs of the end of 2010, there were 442 real estate companies in the city of Ordos. Almost every energy company has a real estate development business. And coal mines are the most important and almost unique source of support for the Ordos real estate market,â€ the report said.

Bustling is the desolation?

Coal will eventually run out of water. Peng Xingting, a doctor of economics at Xiamen University, pointed out that due to coal booming, it may also be due to coal. If resources do not bring about innovative, equitable, and sustainable production methods, the Yulin forests now, like many resource-based cities and regions, may become desolate once they have been dispersed.

According to statistics, by the end of 2008, the area of â€‹â€‹goafs formed by coal mining in Yulin City was 419.41 square kilometers, of which 88.143 square kilometers had collapsed, and the number of affected people had exceeded 10,000. The number of lakes in the city from the 869 before the development was sharply reduced to the current level. 79. At the foot of the bright and colorful billionaires, there are tens of thousands of people who are struggling to survive. Although there are high-growth fiscal revenues, Yulin is still an economically underdeveloped region. There are no highways as extensive as Ordos, and there are no magnificent cities like Kangbashi.

â€œIn Beijing, investors from Shenmu and Fugu in northern Shaanxi, together with the funds from Shanxi and Ordos, became the promoters of high housing prices in the capital. When the coal of Yulin was dug up, when the funds were withdrawn, then, in addition to the devastating In the field, there are only empty, empty cities.â€ Peng Xingting said with emotion.

"Just judged from the current macroeconomic situation and the situation of energy supply and demand, the crisis will not break out in the short term," said Zhang Yingguang.

Consolidation can be divided into straight fight or turn fight, fight straight refers piece goods inside the container at the same port handling, without unpacking the goods before arrival at destination, namely goods for the same port of discharge. Such consolidation services transported short, convenient, general strength of the consolidation company will provide such services. Transsplicing refers to the port of destination is not the same goods in the container, the need in the middle of unpacking discharge or transfer. Such goods due to different destination, a long time until the boat and other factors, it is transported long period, even higher shipping