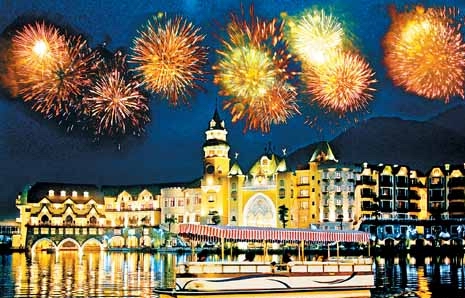 On February 11, 2009, the municipal government held a city-wide tourism work conference, and earnestly implemented the spirit of the 2009 Tourism Work Conference and the 11th Plenary Session of the Fourth Committee of the Municipal Party Committee, and vigorously promoted the full deployment of the city's tourism work in 2009: Shenzhen, 2009 Under the situation of overcoming difficulties and ensuring steady growth in 2008, the tourism industry continued to actively advance and promote the vigorous development of the tourism industry in the city with the development of high-end tourism industry and achieve new growth in tourism.

In 2009, it will actively promote the tourism planning and development of Dapeng Peninsula, and gradually build Dapeng Peninsula into a high-quality international coastal leisure and tourism resort.

In 2009, the effectiveness of tourism promotion and promotion was continuously improved. With the goal of building tourist destinations, focusing on stimulating internal and external needs, according to the changing trend of key source market structure, we will increase the intensity of going out and direct the promotion of tourism market. Strengthen tourism cooperation between Shenzhen, Hong Kong, Macao and Taiwan to build a tourism circle in Shenzhen, Hong Kong and Macao. Gradually explore the Taiwan market and attract more Taiwanese tourists to Shenzhen for sightseeing and leisure.

In 2009, we will continue to organize the city tourism event. We will run the Guangdong International Tourism and Culture Festival Shenzhen Branch and the Shenzhen International Tourism Culture Festival to enhance the level and influence of the â€œOne District Oneâ€ activities in each district. Through the event promotion, Shenzhen's international popularity and tourism attraction will be expanded, and efforts will be made to achieve a significant increase in the number and consumption of tourists. Further explore the feasibility of hosting the China (Shenzhen) high-end tourism expo and carry out preparation work.

In 2009, the Grand Canal Tourism Action Plan will be launched as soon as possible. Drawing on the experience of Beijing and Qingdao tourism industry for the Olympic Games, comprehensive mobilization, careful preparation, launching the Universiade tourism service action plan, and earnestly doing all the preparations for the Universiade.

In 2009, Shenzhen tourism work will actively promote the national leisure tourism plan. We will carry out special investigations on the National Leisure Tourism Program, conduct pilot projects for the National Leisure Tourism Program, implement relevant policies and measures, and actively promote enterprises to carry out paid vacations, incentive travel, welfare tourism, and include study tours in primary and secondary schools. The practice has made tourism an important means of enhancing people's livelihood welfare and building a harmonious society.

Comprehensively build a public tourism information network. Improve the service function of the tourist city with a perfect tourism public information system. Through SMS, voice station and other means to increase the convenience and information of tourists to obtain tourist information in Shenzhen. Through the Shenzhen Tourism Network to timely release new tourism information, establish a large-scale SMS group launch platform, make full use of electronic media to promote, further promote the "tourism promotional items into the hotel" activities, and promote the establishment of tourist service centers in major scenic spots and attractions.

Coordinate the promotion of travel agencies and their service outlets into the community. Guide the city's travel agencies to establish a network of tourism retail services covering the whole city and a clear hierarchy. Set up a travel agency business department in the commercial area, residential community, tourist distribution area, etc., and set up an agreement to close the hotel in hotels, convenience stores, etc., to further facilitate the citizens to travel.

Pay close attention to the standardized management of tourism market and supervision of tourism quality. Adhere to the combination of daily inspections and key inspections, build a credit system for the tourism industry, further promote the â€œQuality and Honest Hong Kong Tourâ€ activities, and actively promote the â€œQuality and Integrity Macau Tourâ€ activities.

In 2009, Shenzhen tourism work will promote policy innovation and further optimize the tourism development environment. Taking the opportunity of the Guangdong Provincial Party Committee and the Provincial Government to issue the "Decision on Accelerating the Reform and Development of Tourism in Our Province and Building a Strong Tourism Province", we will strive to introduce the "Opinions on Further Accelerating Tourism Development and Building an International Coastal Tourism City" as soon as possible, and launching support. The development of tourism enterprises and the series of policy measures to increase the opening of the tourism market.

Effectively regulate the service behavior of tour guides and establish a guide management mechanism in line with market rules. Exploring the establishment of a reasonable tour guide service charging method and the guide labor remuneration system, standardizing the methods and standards for tour guides to collect commissions and tips, and effectively guaranteeing the right of tour guides to obtain legal labor income. Strengthen consultation and investigation with the municipal labor department, and strive to take the lead in the country to include the tour guide work into unified labor management, and solve the institutional obstacles in the recruitment of workers and labor security.

Accelerate the pace of introducing international brands and promote a new level of corporate management and service. It is necessary to intensify efforts to introduce foreign-funded travel agencies of world-famous brands into the city, to take the lead in piloting foreign-funded travel agencies to operate Chinese citizens' outbound travel business, and to promote the establishment of an international enterprise management system in the travel agency industry. Continue to introduce the top management brands of the world hotels and study the pilot travel satellite account statistics system. Carry out research work on tourism satellite accounts, establish scientific and effective statistical systems and statistical methods, correctly reflect and evaluate the status and role of tourism in the tertiary industry and the national economy, and comprehensively reflect the tourism industry's role in the economy.

The person in charge of the Shenzhen Tourism Bureau pointed out that tourism is the fastest growing and most promising sunrise industry in the world. It is an important window for displaying the image of the city, an important growth point for economic growth and an important part of developing high-end service industry. Despite the current financial crisis and difficulties encountered, the development of Shenzhen's tourism industry is also facing a good opportunity. The Shenzhen tourism industry will emancipate the mind, innovate and forge ahead, and make Shenzhen's pace of building an international coastal tourism city Better and faster.

In 2008, the city's tourism industry was united and faced with difficulties. Overcoming the impact of ice disasters, earthquakes, financial tsunami and other tourism on tourism, with the goal of building an international coastal tourism city, it achieved a good pattern of contrarian development. In 2008, the total number of tourists received by the city was 65.553 million, an increase of 2.93% over the previous year. Among them, the number of overnight visitors was 26.593 million, an increase of 3.87%; the total tourism revenue was 51.783 billion yuan, an increase of 1.31%.

In 2008, the city's tourism development fundamentals maintained a good momentum, and the Shenzhen tourism industry system and supporting facilities became more and more perfect. As an important tourist destination, source of tourists and outbound travel distribution center in Shenzhen, Shenzhen has maintained its leading tourism economic indicators such as total tourism revenue, tourism foreign exchange income and overnight visitors. It continues to rank among the top cities in China. The major tourism economic indicators for the year have risen steadily but the growth rate has slowed down and individual indicators have declined.

Statistics show that in 2008, the city's tourist attractions received 26,602,300 tourists, an increase of 1.07% over the previous year. Among them, the scenic spots received 1,712,100 tourists, an increase of 1.17%. The increase in tourist traffic in the tourist attractions was mainly due to the opening of the Overseas Chinese Town in the large-scale eco-tourism scenic spot in the city.

In 2008, the tourism industry in our city faced difficulties and actively promoted the construction of major tourism projects. The second phase of the East OCT Project and the renovation of the 15km coastal scenery project in Shenzhen are progressing smoothly. The large-scale integrated tourism and entertainment community â€œHappy Coastâ€ started construction. The plan for the expansion and expansion of the Shekou Port Cruise Terminal and the surrounding entertainment and tourism areas covering more than 1 million square meters passed. Review. The OCT Group won 4 gold and 3 silver at the IAAPA American National Exhibition organized by the International Association of Amusement Parks and Attractions (IAAPA).